Sharing is Caring, Do It!

On Twitter, theres #WeAchievedSomething making the rounds, people sharing what MTMTE/LL means to … 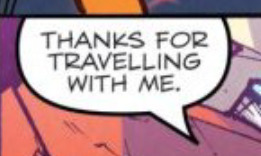 On Twitter, theres #WeAchievedSomething making the rounds, people sharing what MTMTE/LL means to them, showing their appreciation, and I wrote a thread for it too, and thought Id share it on tumblr as well, because MTMTE literally changed my life and though Ill keep it short because Ive talked about this many many times before in great detail, I wanted to say something now that its ending. I put it under the cut for length <3 My favourite comic book series is ending tonight. I’ve said a lot about how important it’s been to me already, but I want to say a few things anyway, because it honestly helped me with a lot of my struggles and I don’t know where I’d be today without it. I’ll keep it short.
Basically, I got into Transformers during a time where I was so frustrated with myself that I didn’t even know why I existed in the first place, I was just kinda there, didn’t know what to do with myself & I was sure I’d just die one day without having ever accomplished anything.

I didn’t expect much from Transformers comics, and got a heartbreaking story about a bunch of oddballs who didn’t know what to do with themselves either, their relationships, goals and pursuit of finding ANYTHING, and it just resonated a lot stronger than I could’ve anticipated. Watching these REALLY relatable robots with all these doubts struggle, die, but also succeed in their search for their place in life, made me think that this person that I am and dislike so much isn’t gonna be me forever if I try, and that maybe, I can be worth something too.
It made me wanna draw comics again, it made me realize that you can make any story deeply interesting if you put your heart into it, and that you can genuinely help someone with what you do – because it certainly helped me a lot, and I want to learn to do the same. The biggest joy in all of this is that I met @larrydraws, my girlfriend whom I love more than I could ever put into words, something I would not trade for anything in the world, and something that, as she said in her own thread, might’ve never happened had it not been for TF.
I made so many friends, met so many unique and funny people, and got to be part of this welcoming, warm fandom. It’s bittersweet watching the Lost Light and her crew end their journey, it feels like we’ve all traveled and grew alongside them, but I’m glad we got to see all of it.

I also want to say that this is one of the most welcoming and open-hearted comics I’ve ever read, #6 is my favourite issue, Rung is the most painfully relatable character ever, and this is my favourite quote that struck me hard the first time and feels the most appropriate now: I want to thank everybody involved in this comic for everything. I’m gonna miss Rodimus & his crew a lot, they came into my life when I didn’t know where to go, and I’m happy that today, I get to be at the runway stronger than I was before and see them land.